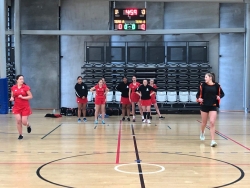 This year our Nua A team travelled to Wellington for the the annual Lower North Island Secondary School Netball Tournament.  This was the first time that the tournament was played inside at the ASB stadium in Kilbirnie.

We played a total of nine games with three wins and six loses over the span of five days.  I would like to commend the team on the way they not only represented themselves but also their families and our school.  We finished 22nd which was an improvement from last year.  We bid farewell to our Year 13 student Jemma Baines who led her team well on and off the court.  We have a young team and look forward to competing again next year.

Also a big thank you to One Foundation for contributing towards accommodation and travel costs for our team.

Photo:  Pulse player Maddy Gordon taking the Nua A Team for their warm up

Click the link below to hear the story of our amazing student Alyssa...