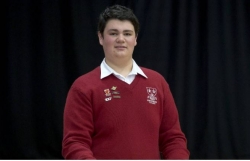 Helping students with mental health, changes to NCEA and transport are the main concerns of an aspiring Horowhenua politician.

Year 12 Horowhenua College student Jamie Harper became the Horowhenua youth MP this year and wants to improve the problems youth are facing in his electorate.
Jamie, 16, applied to Horowhenua MP Nathan Guy this year for the role and was accepted. Jamie said he was politically focused.
“I know what issues are facing young people today through on my work on student council and youth voice, which allows me to engage with youth in this area.”

This year Jamie helped organise a Gumboot Friday event at school.
Gumboot Friday was part of a nationwide awareness day for Mike King’s mental health programme I Am Hope, which aims to raise money for counselling for young people.
Jamie said a lot of young people were confused about the changes to NCEA announced this year, so he was keen to help students work through that.
Transport access to Wellington from Levin was something else he wanted to work on.

Jamie became interested in politics in his first year at high school in 2016 during the New Zealand flag debate and he gained an insight into how politics worked when then Finance Minister Bill English visited the school during that time.
“I started thinking how politics is a way you can make change,” Jamie said.
He also believed in electoral reform for young people, because if young people paid tax they should be able to vote.
He called himself a centrist and he was keen to go into Parliament one day.

Jamie is on the school’s student council, the academic committee, the social action committee and Māori achievement programme.
He plays the guitar, saxophone and clarinet.
When he leaves school he wants to study law and public policy.

Click the link below to hear the story of our amazing student Alyssa...